A solar power inverter is a crucial component of a solar power system. It converts the variable direct current (DC) generated by PV panels into a utility frequency alternating current (AC) that is directly consumable by the electrical appliances and can be fed into a grid in case of an energy surplus. Solar inverters fall into 3 major categories: grid-tie inverters, stand-alone inverters and battery backup inverters.

Grid-tie inverters match the phase with the sine wave provided by the grid. They don't operate during the grid outages so they're not appropriate for emergency supply. These inverters allow solar panel owners to account for net metering. Net metering is the mechanism by which solar energy producers are credited by the grid if they feed surplus electricity to the grid.

These are the most common type of grid-tie solar inverters and appear in most of home solar energy configurations. The name stems from the fact that all photovoltaic panels are stringed together and tied to a single inverter which then handles the conversion of the current into an alternating current (AC). The drawback of this configuration is that the power output of the whole system is reduced to that of the system's least productive panel. Hence if one or more panels are shaded the performance of the whole system degrades.

This type of inverters is not directly connected to the energy source like PV panels. Instead, they take the DC from batteries that in their turn can be charged by solar panels or any other energy sources like hydro/wind turbines and so on. Some of these inverters employ battery chargers to charge back the batteries from AC source if available.

Battery backup inverters draw the energy from the batteries and can charge them back later using onboard chargers if needed. When the batteries are fully charged they provide the surplus to the grid. During a blackout, they're able to provide AC power to select electrical devices. Because these inverters interact with the grid they need to implement anti-islanding.

Solar micro-inverters can be used both in off and on-grid scenarios. As opposed to string inverters micro-inverters connect to each panel separately and convert its DC into AC to be consumed by the electrical appliances. This design allows connecting multiple PV panels in a modular way and adding new modules after installation. Micro-inverters individually optimizes each panel's output and ensure higher power yield especially during cloudy weather when some of the panels may become shaded or otherwise obstructed.

Here we have looked at some small-scale solar inverters. These inverters take in 12V - 24V DC and convert it into 110V AC. They can be connected to a single solar module the output voltage of which matches the inverter's input voltage. These inverters are suitable for small DIY solar projects and not for powering an entire home. Instead of a solar panel, they can also employ a car battery as a power source. 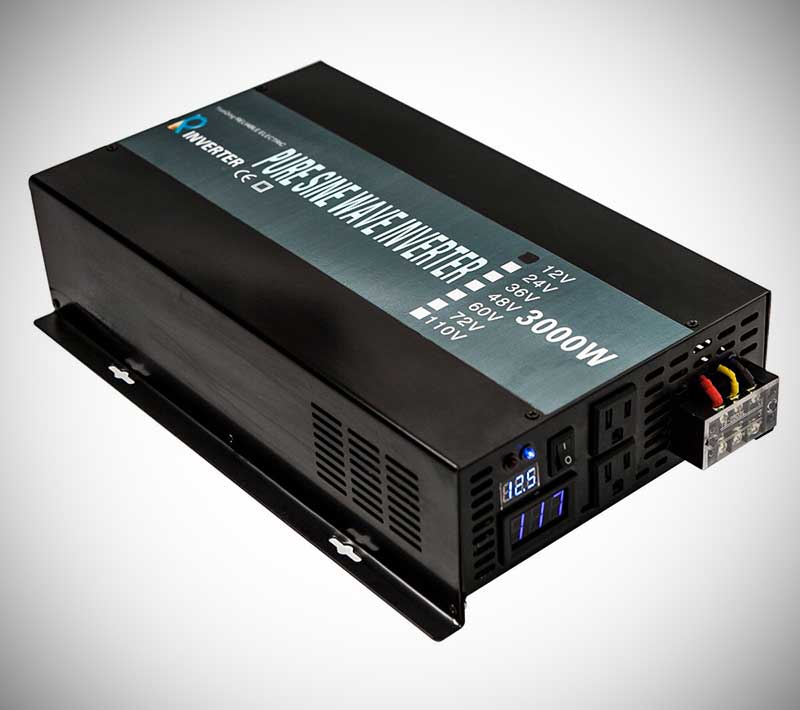 WZRELB recommends using the standard cables included with the device to maximize the output. Several words of precaution: please do not neglect safety measures, in particular, don't connect the inverter with the grid and pay attention to not reverse connect the positive and the negative. Before turning off the inverter please first turn off all the loads. In the opposite case of turning on the system please first turn on the inverter and then the loads. When using this inverter please pay attention to the power draw of the loads you connect to it. For example, inductive loads draw 3-7 times of the rated power. To be absolutely safe assume 10x increase. So for 300W rated fridge assume it can peak at 3000W. 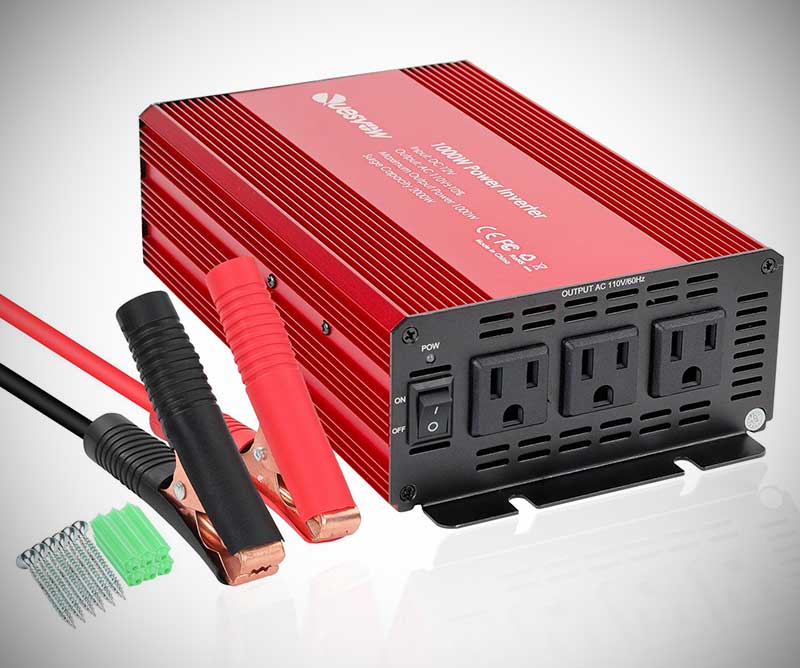 Quesvow provides 1000W power for use with 3 AC outlets for household appliances. Can be used with car battery as well as solar PV panel. Features a built-in temperature-controlled fan that kicks in automatically. Quesvow inverter has reverse connection protection for enhanced security. This inverter is not suited for use with inductive loads like those devices containing a motor. 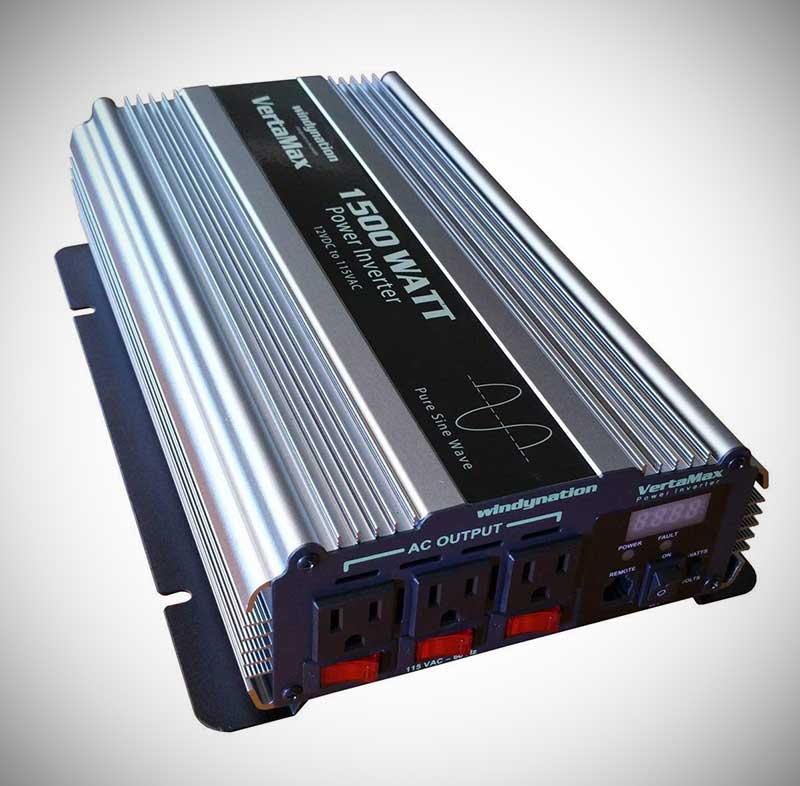 VertaMax is a reliable solar power inverter. It can be used with solar panels to convert 12V DC into 115V AC. It comes in 2 versions: 1500W with 3000W surge and 3000W with 6000W surge. It includes all the necessary tools for installation and it's rather easy to do it. The device features a remote switch with a cord. It will automatically shut down at excessive temperatures. This device has all the usual protections against short circuit, high voltage and so on. The only real downside is that the watt-meter can be significantly off the real reading. 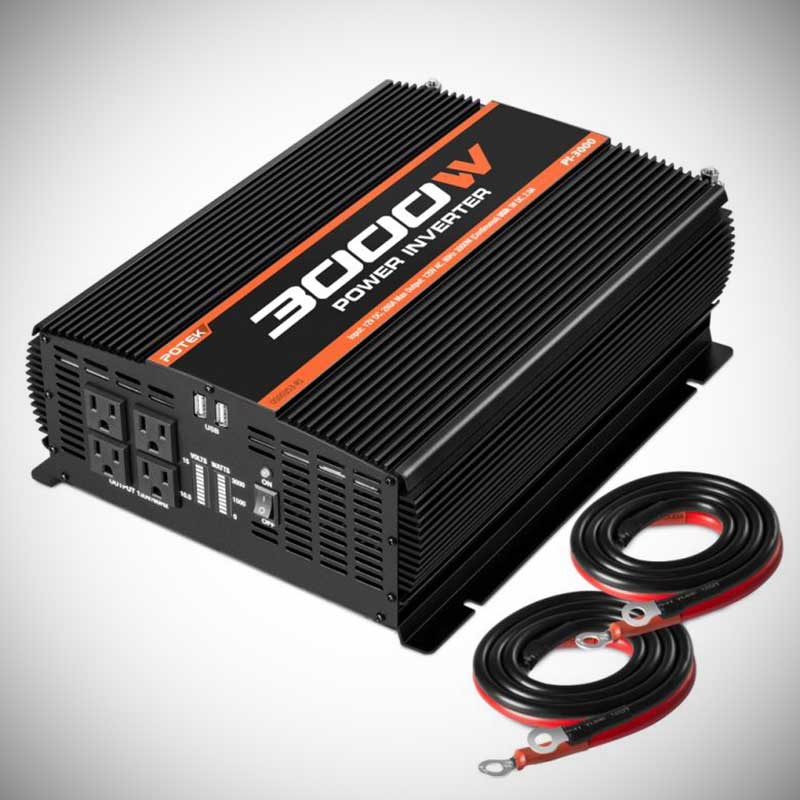 Potek power inverter can output up to 3000W, peaks at 6000W. It has 4 AC outlets. Takes 12.8V  - 13.2V DC and outputs 110V - 125V AC sine wave. Includes cables for connecting to a battery. Although it can support simultaneous operation of 2 and more devices given they don't surpass the wattage limit it is still recommended to connect appliances one at a time. 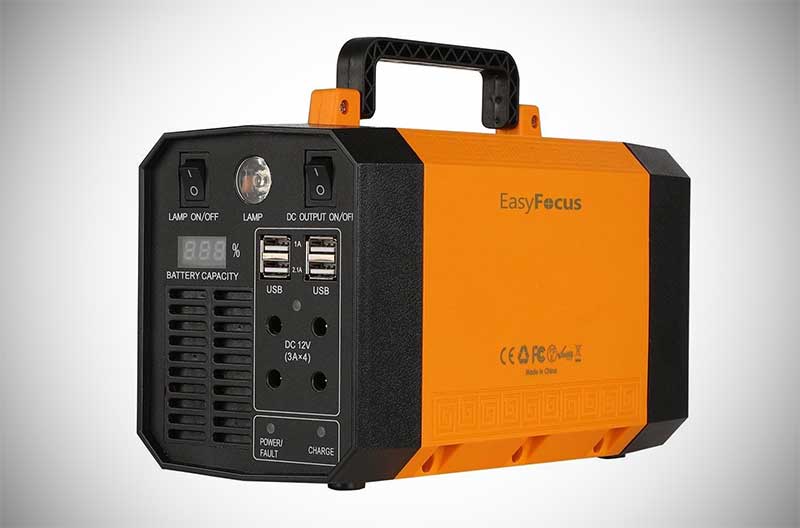 EasyFocus is designed for camping. It's made to be a portable and reliable power source. With built-in 18Ah/200Wh it can support say 50W power draw device for 4 hours. EasyFocus has a complimentary 18Vmp, 60 - 100W solar module sold separately. If the AC device's total power exceeds 300W EasyForce will automatically switch to DC mode for self-protection. In contrast with many other inverters, EasyFocus has a lithium battery for emergency backup. The battery can be charged through either a solar PV panel or a wall socket or a 12V car charger.